Looking the other way...

brings us to the question- Why would you want to look the other way to begin with?
Is the sight in front of you unappealing, an eyesore, difficult to chew and digest or simply because seeing it would further reinforce that things aren't as much in your control as you would like to think?

I suspect the latter. Because usually I find (on intro and retrospection) that's how things are pour moi. And it's extremely annoying and not entirely liberating to be honest with yourself. All honesty does it make things unarguably clear about the prevailing circumstances, the likelihood of things being in the future or how they've actually gone down in the past. Honesty yanks off your glasses- rose tinted and otherwise and forces you to look at things and their underbelly.

And while a good, hard look at things is usually educative in itself- it isn't a lesson that you might have wanted to learn in the first place.
Ergo, selective vision or looking the other way.

You know there's something going down that you aren't entirely right with in your mind but to get involved and set it right the way you see it may involve stepping into a quagmire or opening up a can of gigantic worms!

Now WHO is this day and age wants to deal with the creepy, crawlies of human behavior unless the pay offs are totally worth it? Not many of us. Because human behavior is often tidal in it's nature. The tsunamis take their time getting generated but the tides and ebbs keep occurring and unless you're quite sure of getting swept under or away, most of us are ok with getting wet every now and then.
Keeps life interesting even. Adds a headache or two in the process but hey- omelettes and eggs huh?

Here's to looking away, hoping that playing semi-ostrich leads to peace of mind and not pieces and that while your head is in the sand someone doesn't come and kick the living daylights out of you! 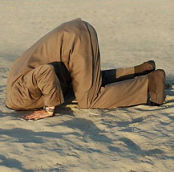