Let me be the first to admit that I'm gaga over Hugh Jackman. He epitomizes the essence of stereotyped masculinity for me- ruggedly handsome, broad shoulders, good dentition and a sense of humor. Also, let's not forget his height.I am especially gaga about Mr.Jackman as Wolverine 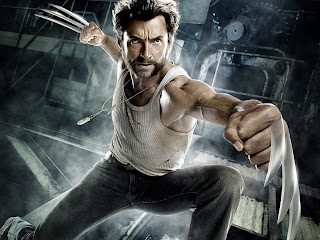 ( with his dog-tags, facial hair that stops short of being massively hirsute and the rippling muscles and gleaming claws) and therefore was awaiting his latest stint as the mutant with a lot of ill-concealed anticipation but alas...I was to be disappointed: in both Mr.Jackman and his onscreen avatar.

Here's what works for the movie- it helps you pass the time on a Friday night. That's it!

Here's what doesn't work- Mr.Jackman looking older and tireder (I understand Wolverine has a lot of mental angst but for a man who doesn't age, he looks like Botox would be a good call) and his emoting is stilted and every dialogue is via clipped teeth and an annoyance at life at large which is off the charts. And what's with the rippling sinews? Did someone unleash worms under his skin? Jeez!
Logan is at crossroads so maybe it makes sense for him to seem disinterested or even angry at the world at large while he figures out whether to cross over to Jean Grey or stay on this mortal coil and remain indestructible. Whew! Lots of tough choices to make.

Moving on- the movie doesn't meander or jump but seems to be lacking in the life that was so chock full in X-Men Origins: Wolverine.

With the Japanese underworld getting into the act, Admantium samurais and a new mutant- Viper who appears out of nowhere and is again banished fairly easily the bad guys really don't have much of a role to play.

Tao Okamoto as Mariko is fine. Period. Some liveliness is injected by the red haired Yukio (Rila Fukushima) but everyone else is just a bit player and can be done without as well.

For that matter the action is hackneyed with the same kind of moves being executed by Wolverine and the people he's fighting against. Hardly any sign of newness that should come with the vision of a new director-James Mangold
And definitely nothing remotely like the kind of edgy action one found with the last Wolverine outing the last fight scene had Wolverine slashing off the head of Weapon XI aka a further mutated Deadpool

All in all...the movie is tired. You too feel tired watching it and while exiting you wonder where Wolverine went and if he and Mr.Jackman will return in the avatars that made them famous.

Rating: One thumb down.
Posted by Ayanti Reddy at 11:39 PM