Ol' MacDonald Had A What??!

Kids usually like animals. Love them even. They tend to like some over the others. As do we all. And then they also tend to juxtapose their likes onto each other and end up create a new landscape which can often rival Lewis Carroll's Wonderland.

Now my son hasn't come up with a new Jabberwocky but he's decided that Ol' MacDonald needed to breathe some new life into his decades old farm because horses and pigs just weren't cutting it any more. So he added some tigers, lions (apparently both these majestic beings sit up like a Buddha, make tiny little paws and say "AAARRHH".
Then came the zebras, the monekys, snakes, giraffes, elephants, yaks, fishes and transformed a once rustic farm into the San Diego Zoo.

Ok. Zoo in place. Now what? Now we need to holler at everyone that we have a farm (read zoo) and let them know how our animals sound. By the way, I forgot we have camels too!
Well, we got the tigers' and lions' growls down pat but what do we do about the giraffes and zebras who are notorious for keeping their mouths shut and not wreck the peace like the rowdy lions? Well combining snorts,smacks and other odd sounds we come up with a cacophony that satisfies even the toughest customer aka tots who don't watch Animal Planet!
And now that the sound check is complete and the farm is a grade A jungle any self respecting person would think twice about going into, 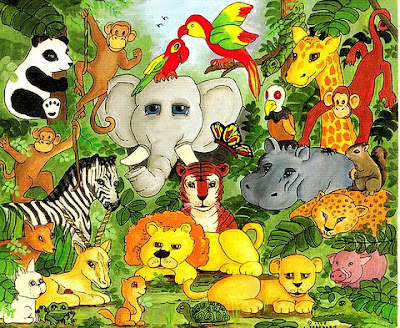 the master of this creation announces he'd rather watch Chhota Bheem! Well...I guess we'll just leave the tigers and the moos to play nice till next time :-) 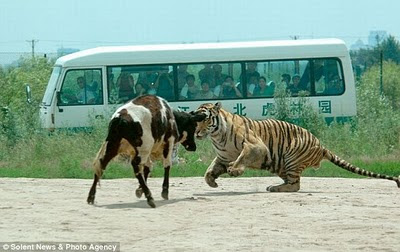