This has been a doozy of a year but then again I guess I usually end up saying that about most years while they're ebbing. But there have been a lot of things, meaningful things, that have happened this year which will probably not happen again. But again, that's true of every year although the degree to which the sentiment is felt varies.

The son and heir started school, playschool, but school nonetheless. He skipped in happily enough and took the hand of the teacher there (a person he'd never seen before in his life) and went right in to the kiddy room. He didn't much give a thought to Red and I waiting outside. But the moment the wailing began from the other children he decided that solidarity was the name of the game and he joined in too. And once his loud pipes joined the melee well...the melee became a solo performance of sorts. The other kids whimpered but mine HOWLED. Anyhow, that went away surprisingly quickly and he completely adapted to this brand new aspect of his life so seamlessly one would think he had been going for ages.
One of my personal highs (and an amusing one at that) was the summer I spent at my parents' place. Finally, that stage in parenthood had been achieved when I took my kid to his nani's place for the summer. Life had come full circle for me- I used to be taken to such a place myself and now I had someone who I would be taking :)

Little things began to amuse me more than they used to..rather I began to take more joy in the "prosaic". The way the leaves of the plants glowed when I watered them...I watered them and watered them till the discernible dust had been blasted off them. Unfortunately my son too got the same idea only his wasn't restricted to the flowerpots. 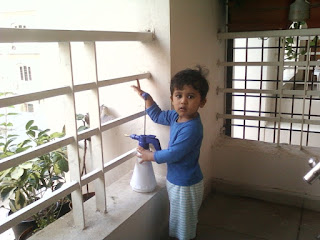 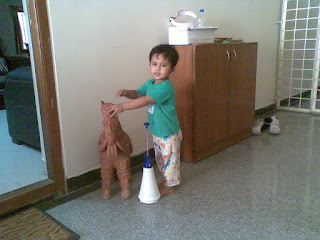 He watered me, the balcony chairs, himself..Oh HOW he watered himself over and over again. I don't know if that's been helping him grow. He's stopped being chubby and has become lean. He lives on air, milk and juice and meal time is usually one where bargains are made over which show he can watch- the horrid Chhota Bheem or the Simpsons. Once Masterchef Australia stopped, he didn't quite take to Masterchef USA. I guess Gordon Ramsay and Joe Bastianich  put off quite a few people!
We got the imp his very own cycle for Christmas and until he begins to pedal properly it's up to us to put the cricks in our back aside and keep pushing him everywhere he wants to be wheeled :) 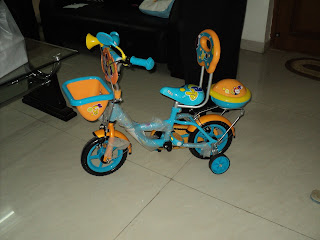 The year also marked a departure from quite a few things, people, habits, thought processes and basically set me up for another year of parenting, some tough decisions, some good times and a yearning for patience, good sense and energy to see things through to the end in 2012.
But knowing me, it'll probably fizzle out the same way the resolutions about getting in shape have been fizzling out for the past few years. One thing I am looking forward to is our first proper family vacation. The rest of the stuff like the monkey starting nursery, completing 5 years of married life (oh boy! talk about doozies) are stuff that future blog posts will be made of.
Signing off in 2011.
Posted by Ayanti Reddy at 6:23 PM

Email ThisBlogThis!Share to TwitterShare to FacebookShare to Pinterest
Labels: retrospection, summing up