Turning a Proverb on It's Head...

Throughout my school days the proverb of "an empty mind being the devil's workshop" has been echoed by teachers, principals, students in charge of the noticeboard duty and other bored, uninspired people.

But what happens when the mind isn't empty but brimming over with ideas? I'd say that qualifies for a barrel full of devils..imagine Lucifer, Beelzebub and Mephistopheles in a heady cocktail mix. Gives one pause?

I have a very strong feeling that little children, aged 2 years and above have so many thoughts running through their minds, so many things stimulating them, inciting their curiosity that that their resulting actions often bring out the imp in them.
And who better to take as an example than my own offspring?

He's been fascinated with this- 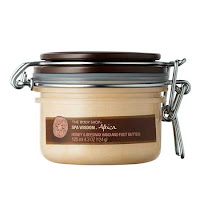 for a very, very long time. The locking mechanism is what drew him ironically and the texture interested him enough to have him seek it out from it's various hiding places. And with the patience of a lion hunting its prey, he waited and watched and with bated breath found a window of opportunity when I was busy and got it in his grasp.
I'm not sure *how* he managed it, but I guess he stood on his scooter for leverage and managed to inch it closer to himself using a pencil I'd seen him handling earlier in the day but had forgotten to keep out of his reach.
I was a bit busier than usual with some kitchen remodeling work and thought MLM safely and entirely engrossed in his Chhota Bheem cartoon. By the time I was done and went to tousle the hair of my hitherto fairly still child, I found him covered head to toe in my hand&foot cream. He'd eaten some, liberally applied the rest on his clothes, hands, legs and let's not forget the sofa!
He was so creamed up that he had become slippery.
We trekked to the bathroom where he sat patiently enough and let me hose him off; now that his objective was accomplished. And soon after that he kept asking for more cream, " Give kleem". Yeah right! Like I need my walls smelling of aloe vera as well.
But that's the kissa kream ka. Oh and he ran away with the veggie peeler, the screwdriver and broke a glass vessel also. All within the span of an hour.
All in a day's work for a preschooler I'd say.
Right about now I'd like to test out that hypothesis about the empty minds...it simply CANNOT be any worse than his filled-to-the-brim noggin, can it?
Posted by Ayanti Reddy at 9:46 PM